Why is Defibrillation Important?

Early defibrillation is the only definitive treatment that will save a victim of Sudden Cardiac Arrest (SCA). It is relatively simple to perform, and must be administered immediately onsite upon recognition of SCA, coupled with proper CPR techniques. Rapid defibrillation is proven to save lives and is the ONLY effective treatment in an out of hospital emergency that will prevent a victim from dying within a few minutes.

Resuscitation science tells us that CPR itself may double chances for survival when given by someone with CPR training, however, rapid defibrillation is still the only way to restore the heartbeat. Once the heart has entered a state of arrhythmia, typically in SCA either pulseless ventricular tachycardia or ventricular fibrillation, it will rarely ever return to a normal sinus rhythm on its own.  As long as it is in this state, the heart is not effectively pumping blood through the body and the brain and other vital organs rapidly die.

Essentials of the “Chain of Survival”

Most of us have heard of cardiopulmonary resuscitation, or “CPR”, a breakthrough in emergency medicine. Once cardiac arrest has occurred, sudden cardiac death draws closer with each passing moment. Learning how to do an effective chest compression, as well as gaining the ability to quickly recognize heart-caused emergencies such as SCA, heart attack, stroke, etc. is extremely important for first responders.

As indicated by the American Heart Association chain of survival (below), victims should receive early CPR to help sustain life when the heart stops pumping blood. Early recognition by the first responder leads to the reduced response times so crucial to increased survival rates.

However, chest compressions for circulating blood are only a short-term substitute for normal oxygen-rich blood flow. Sudden Cardiac Arrest victims need rapid defibrillation. After three minutes of cardiac arrest without successful defibrillation, the cardiac arrest survival rate begins to decrease by 10% per minute. Thus early defibrillation to allow the heart muscle to restart with a normal rhythm is essential to save lives; this is made possible through timely response with automated external defibrillators, or “AEDs”.

Just as soon as an AED is available and deployed, a first defibrillation attempt should be made even if very little CPR has been performed. The combination of cardio pulmonary resuscitation and electrical defibrillation should continue until emergency medical services personnel arrive to provide out of hospital advanced life support for cardiac arrest.

The heart beats in response to electrical impulses from the sinus node, your body’s natural pacemaker. It is an area of specialized cells in the upper right chamber of the heart which controls the heart’s beat, or rate of pumping oxygenated blood through the body. The sinus node creates a steady pace of electrical impulses which may change depending on your activity, emotions, rest and other factors.

The rate, or pace, of your heart is referred to as the “sinus rhythm”.  A normal sinus rhythm means the electrical pulses from your sinus node are being properly transmitted throughout the heart muscle, producing a healthy heart rate. However, the heart may begin to beat abnormally fast or slow, or in an uncoordinated fashion, in some cases resulting in Sudden Cardiac Arrest. If this occurs with no intervention, the victim will almost certainly and quickly die.

What is an AED?

Simply stated, an AED is a device that analyses heart function, then delivers an electrical shock as needed to stop it momentarily, allowing it to start again with its own normal sinus rhythm. By interrupting the misfiring electrical impulses which occur in Sudden Cardiac Arrest, the machine allows even inexperienced first responders to give effective first aid in out of hospital settings. You can learn more about what an AED is or what AED stands for in this article. While the first portable defibrillators were simple in that they operated on the principle of delivering a single shock to a fibrillating heart, they still demanded a considerable amount of expertise in actual deployment. Only certain conditions indicate use of rapid defibrillation, and successfully shocking and restarting the heart in cardiac arrest relies on proper placement of electrodes through electrode pads, control of the amount of electrical current, correct timing, etc.

Nevertheless, rapid defibrillation came to be understood as the only treatment that can restart the heart in simple and timely fashion (without opening the chest or injecting a heart stimulant). It was clear to be seen that portable AED use markedly reduces the time to first defibrillation; since death comes so quickly to the untreated SCA victim, there was natural stimulus in the medical community for the development of a sophisticated machine for use in the field to facilitate early defibrillation. The desire to further improve survival rates, coupled with growth in medical and electronics technology, has led to rapid development of portable AEDs. Use of today’s modern automated external defibrillator by an untrained bystander to give first aid is now made possible. Computer technology provides an easy-to-use interface, guiding the rescuer and controlling the shock-giving capability of the machine. Most anyone, even a child, can now operate an AED, giving crucial first aid in case of an SCA emergency–making the difference between life and death.

Additionally, our most up-to-date AEDs now incorporate real-time CPR guidance and feedback with the delivery of any shock(s) needed for defibrillation. This is a leap forward in improving the survival rate of SCA victims, since response times are so important to the resuscitation success rate. As noted above, the  American Heart Association considers both CPR and rapid defibrillation important, placing them at the core of the “Chain of Survival”.

Thus today’s AED is not simply a defibrillator, but rather a sophisticated medical unit for use in rapid rescue of victims who have collapsed with a heart crisis. The goal of early defibrillation coupled with “high-quality CPR” (See Resuscitation, p 391, European Resuscitation Council) has been reached with the refinement of the portable public-access AED!

Many states are taking a strong lead in making AEDs universally available and encouraging public awareness and training to handle SCA emergencies. 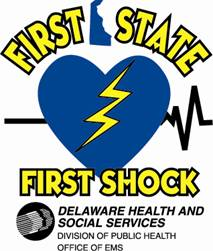 One such program is the Delaware Early Defibrillation Program. It is managed by the Delaware Department of Health and Social Services; the program, begun in 1993 with deployment of some of the first portable AEDs available, “…continues to combat death and disability by sudden cardiac arrest. Funding for the program is used to purchase AEDs and provide initial CPR/AED training to agencies applying for an AED through the program.”

What are the signs of Sudden Cardiac Arrest?

The Signs of sudden cardiac arrest are immediate, drastic and include:

What is “Pulseless Electrical Activity”?

PEA is a heart rhythm with no apparent pulse in spite of the presence of electrical activity. Unlike ventricular fibrillation or tachycardia, it typically doesn’t respond to shock with an AED, but can be treated by other means, including cardiopulmonary resuscitation and injection.

When Should an AED be used?

An AED should be used when a person has collapsed and is not breathing. Find the American Red Cross steps to use an AED here, or review our guidelines on how to use an AED. Today’s AEDs analyze the function of the heart via pads which you will attach to the victim, according to instructions given by the machine. It will not shock the victim (or instruct you to push the shock button) unless it is needed. Certain conditions, such as agonal breathing, can confuse a first aider. The greater the familiarity with signs of SCA, the more confidently a first responder can proceed.

Sudden Cardiac Arrest can happen in people who have no known heart disease. However, a life-threatening arrhythmia usually develops in a person with a preexisting, possibly undiagnosed heart condition. According to the Mayo Clinic these conditions include: Does my state have an AED program?

Virtually all states have laws and legislation regarding AED provision and use within that state.  You can find a map with information regarding your state.

One Response to “Why is Defibrillation Important?”

AED Maintenance Guide
What is AED? What is an AED?