An Examination and Comparison of the Signs and Symptoms 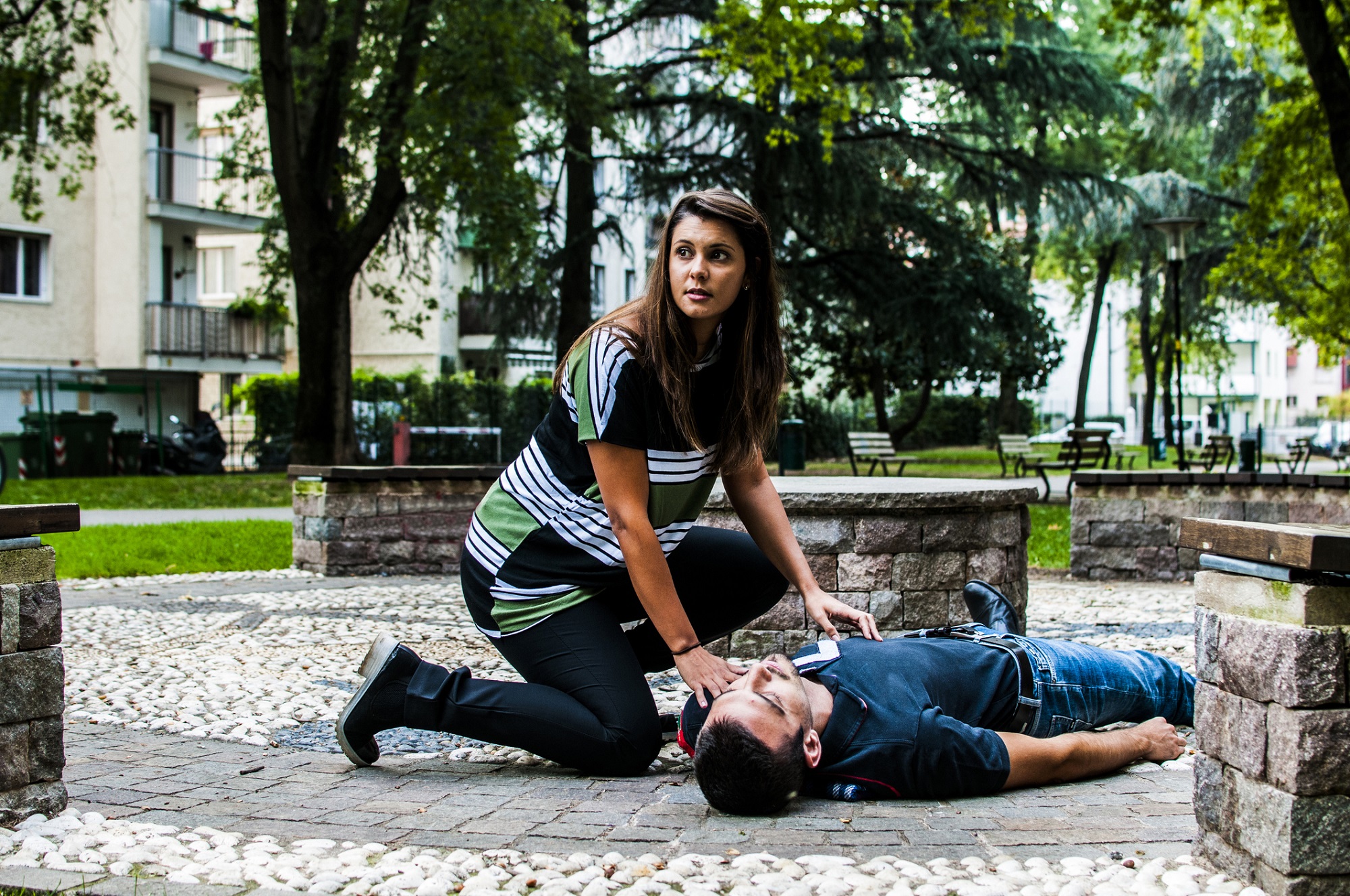 Heart attack and sudden cardiac arrest are two related but separate conditions of the same muscle of the body often mistakenly used interchangeably. Even though they are both cardiac related, prevention and treatment for each is different. Understanding the differences between the two most common and deadly heart conditions, and knowing how to recognize the signs and symptoms of each could mean the difference between life and death for the victim.

Physiology of a Heart Attack

A heart attack, also known as a myocardial infarction, is a sudden and complete blockage of one or more arteries which supply oxygen-rich blood to the heart. This kind of blockage is common in many forms of heart disease. One example is a condition known as atherosclerosis, which is clinically defined as “hardening of the arteries”. When arteries harden, “plaque” forms on the walls of the artery and ultimately blocks the artery completely. It can be thought of as a “plumbing problem”.

As more arteries become clogged completely, the circulatory system is unable to supply the heart with enough oxygen and the muscles within the heart begin to die. This condition, when it reaches its end-stage form, will generally result in a patient suffering a heart attack.

Conversely, sudden cardiac arrest (SCA), can be described as an “electrical problem.” It is a direct result of a lethal cardiac arrhythmia, generally ventricular fibrillation, which can occur in any person, at any time, regardless of health condition. Ventricular fibrillation is a rhythm defect in the heart, caused by an interruption of the natural electrical impulses produced by the sinoatrial node. The sinoatrial node acts as the heart’s natural pacemaker.

The lower chambers of the heart, known as ventricles, begin to beat in an irregular and often rapid pattern, which prevents the heart from pushing blood throughout the body. Without oxygenated blood flowing to the brain, heart and other vital organs, immediate clinical death occurs.

It is crucial to understand sudden cardiac arrest is not a condition which can be prevented entirely by lifestyle changes.  While exercise and a healthy diet help curb artery blockages, other causes of SCA include:

Symptoms of a Heart Attack

A heart attack has classic signs and symptoms a bystander can easily learn to recognize. Generally, someone in the midst of a heart attack will be alert, awake and able to tell you about these symptoms:

A person experiencing sudden cardiac arrest will not exhibit most of the symptoms present in a heart attack. SCA events truly are sudden, as the name implies. While heart attack symptoms can be gradual, sometimes occurring over days or even weeks, SCA occurs instantly when the heart goes into fibrillation and can no longer effectively pump blood. The signs and symptoms of sudden cardiac arrest include the following:

Identifying which condition is occurring dictates which treatment needs to be administered.

Responding to a Heart Attack

Bystander Treatment of a Heart Attack

If you’re a bystander and you see someone experiencing heart attack symptoms, do the following:

Professional Treatment of a Heart Attack

If you’re a bystander and observe someone experiencing SCA symptoms, immediately begin the Chain of Survival:

It is important to remember a patient in SCA is clinically dead. There is nothing you can do treatment-wise with an AED or with chest compressions which will result in any further damage to this individual. In fact, only positive outcomes can be achieved from this form of treatment. Use of an AED and CPR should be initiated in 100% of cases, as quickly as possible.

When comparing a heart attack to sudden cardiac arrest, the information provided here demonstrates the signs and symptoms are not only different but markedly different. Starting the correct treatments outlined above quickly is key to increasing the chances of survival for both.

Barbara, allow us to express our condolences on your loss. Perhaps your comment will inspire others to act and learn CPR.

on august 23,2014, I experienced cardiac arrest. I was in Fort Meyers FLorida. I was in cadiac arrest for over 20 minutes. I was very fortunate to have a great friend, who was able to apply manual effort for over 8 minutes until the paramedics got there. I was put in an induced coma for 3days and have made a complete recovery. Ihave a defibulator.I am 64 years old.

The hospital that I was in is Gulf Coast Medical Center, Ft. Myers Florida.

I am an instructor. Next month I will be giving CPR/AED training to middle school kids, as I have done for the last 4 years. It is difficult, some of the kids don’t have the upper body strength to perform CPR, but they try really hard. It is inspiring to me and I tell them one day they may have to help a family member.

My stepson’s wife was in the hospital last night to be induced. at 3 am she went into cardiac arrest and the baby was having seizures. They had to do an emergency c-section. They are in another state. We need any and all prayers.
Thank you

My husband dropped to the kitchen floor at 2am March 14th 2017. Without 911 I am not sure I would have been able to save him. I have taken CPR many, many times. The 911 operator could hear me counting out loud compressions. He told me to do compressions harder and faster, he reminded me to unlock my door so EMT’s could get in and he reminded me to roll over my husband. 9 minutes of CPR, 5 shocks , a stent and 5 days in the ICU at OHSU saved his life. He is doing well at 69 years.

My brother-in-law died recently while our extended family was together. My son and I performed CPR until the paramedics arrived. On their arrival they took over the care but clearly did not follow protocol. For example I requested a defibrillator which they had but could not find the stick-on leads. I tried to get them to use the paddles to make contact but they refused. When they finally found the leads and attached them it was clear that he was in V-fib. Their leader told me I was reading the rhythm upside down. WTF. It doesn’t matter.
It was horrible. What can one do if the “experts” arrive and are found to be incompetent.
Panama City, FL

We wish to offer our deepest condolences to you and your family. If you feel the responders acted inappropriately we would suggest you contact that agency and/or their supervisor and express your misgivings.

Hi there, thanks for the great article. I have a question I’m hoping you might be able
to answer. I was wondering, What is the difference between panic
attacks and anxiety attacks? I definitely get one of the other but I’m unsure which…
I would appreciate any insight you can provide.

Hello and thank you for your comment. Here at AED Superstore we are definitely more informed about heart-related issues than anxiety, but if you continue to have these episodes, a visit to your doctor would probably be a good idea to see if there is medication to help you control them.

Hi Mary,
We did a little digging and the best answer we found was that to terminate ventricular fibrillation, it is basically necessary to expose enough of the heart to enough current for a long enough period of time. Some AEDs use just one “dose” of joules (150j) for the initial and subsequent shocks, while others have escalating joules, meaning each shock is delivered at slightly higher doses up to the maximum currently used at 360 joules in one manufacturer. It can be assumed during the development of defibrillation, it was discovered 150 joules offered the optimum chance to reset the heart once it is in Ventricular Fibrillation. Click here for more information on the history of defibrillation

You listed that shortness of breathing, dizziness, and chest pain are symptoms of a heart attack. One of my uncles has chest pains last night and we didn’t know how to help him. We will immediately look for a cardiologist so he can get evaluated.
https://www.treasurecoastheartandvascular.com/cardiology/

Symptoms such as you described must always be taken seriously. It may turn out to be something simple, like heartburn, but it is always best to err on the side of caution, better to be safe than sorry, etc.

Well this is awesome post and written very well. Your point of view is very good.

How to Use an AED
It’s Simple to Save a Life!